Gethin planted his first apple pip in 1990 at the age of 8.  Who would have thought that many years later he would plant another seed, not of a tree but of a budding cyder business!  The apple tree is now fully grown and after its fragrant pink blossom it bears small sweet apples.  Just as that tree; Gethin’s hobby of cyder making has now rooted itself and is nicely in fruition. 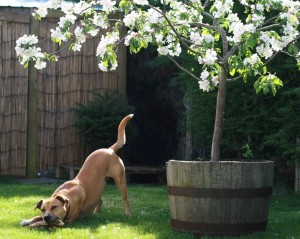 Boog the dog with the apple seedling tree

In the autumn of 2002, already a keen home-brewer and tired of the same old chemical ridden industrial ciders, Gethin decided to attempt to make cider for the first time under the name of “Sudd Cwmpo Drosto” (falling over juice).  He enthusiastically picked a load of crab apples that were growing in a local hedge and continued to feed these rock-solid little apples through a domestic juice extractor.  The apples proved too much work for the juice extractor which eventually exploded with a bang and a puff of smoke leaving Gethin with a 3″ gash in his hand where the cutting blade embedded itself!  Some say that cider making got into his blood on that day!

That initial one gallon demijohn in 2002 eventually turned into 20 gallons then 200 gallons in the years after with Gethin, his family and friends travelling to Monmouthshire to pick some real cider apples to complement the local dessert and cooking apples.

In 2007 production was once again increased when Gethin agreed to take the reins of his friend’s cider making project called the Abbey Apple Co-operative in St Dogmaels.  Abbey Apple Co-op made cider using apples from three apple varieties indigenous to the village of St Dogmaels only; Afal Pig Aderyn (birds beak apple), Afal Pren Glas (blue wood apple) and Afal Pen Caled (hard head apple).  The Abbey Apple Co-op researched into the origin of these varieties and concluded that they had been bought over to the Abbey by monks from Tiron in Normandy for the purposes of making cider.

What was clear to Gethin was these varieties made very pleasant single variety ciders but also blended excellently with the traditional bitter-sweet apple varieties from Monmouthshire.  He started experimenting with various cider making methods, changed the business name to “Gethin’s Cyder” and it wasn’t long before he started winning lots of awards at the annual Welsh Perry & Cider Championships including Champion Cider of Wales in 2012! 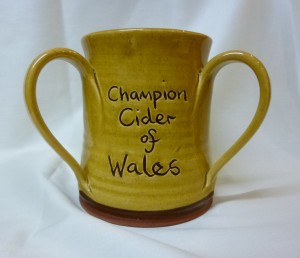 Now with the help of his wife Jules, daughter Emily, dad Dai and brother Carwyn along with some great friends, 7,000 litres (1,500 gallons) of pure juice craft cyder is made every autumn and sold within Pembrokeshire to great outlets.

We often get asked why do we spell cider with a y?  Well, traditionally CYDER was made from the first pressing of the apples.  CIDER was the spent pressed apple pulp with water added then re-pressed to make a second grade drink.

We’ve adopted this ethos that cyder should be made from whole apple juice unlike the small percentage of juice in commercial ciders.